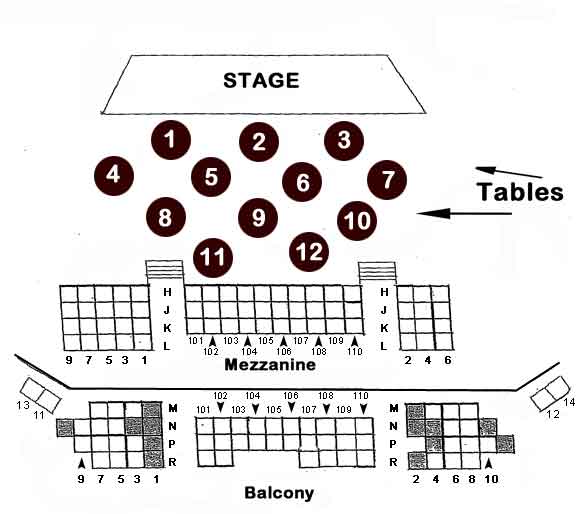 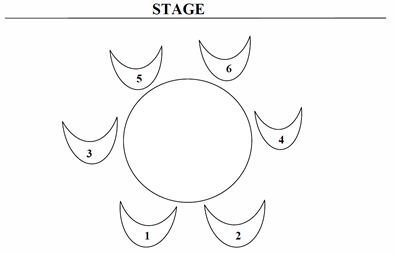 Twelve Tables are located in orchestra area. Tables normally will seat 4-6 patrons (see the table chart to the left).

Please note: The table location shown on the chart is approximate. Exact placement is determined by factors including the stage set up for each particular show and number of seats sold for each performance. Mezzanine is at stage level with a rise toward back. Shaded seats in balcony have partially obstructed view and are not sold.  Please note, for their safety and our peace of mind, no children will be allowed in the balcony.

No matter where you sit, you are going to have fun — so no whining.

To establish and maintain live theatre as an integral part of individual and community life, to use the Theatre facility as a center of entertainment, culture, and education, and to provide a forum for addressing issues of universal interest and importance. 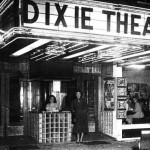 In 1912, an enterprising ex-sponge diver, had a theater built and called it the “DIXIE”.  Opening in April of 1913, he imported traveling theater troupes.  In 1915, with the advent of motion pictures, the Dixie Theatre was converted to a motion picture house.

It became the entertainment center for Franklin County and remained so until 1967, when it was closed, shuttered and left to fall in on itself.

In 1992, Rex and Cleo Partington came to St. George Island for vacation and wandered in to Apalachicola for dinner. In walking around the mostly boarded up town, they stumbled upon the Dixie Theatre remains and noticed the DIXIE Theatre Office sign in the building next door.  Planning to retire within the year, Rex was in his 21st and final year as Producing Artistic Director with the Barter Theatre in Abingdon Virginia, Rex and Cleo thought it was an omen since coincidentally their daughters name was Dixie.  They proceeded to move to Apalachicola with daughter Dixie in 1993 and purchase what was left of the property from the City of Apalachicola.  In 1997 demolition and construction was started on the Theater and in 1998 the DIXIE opened with Sylvia & Driving Miss Daisy.  It is now one of only a few family-owned & operated Professional Equity Theaters in America.  The Dixie Theatre Foundation has produced over 40 professional theater productions, as well as numerous musical events including the ever popular The DIXIE Does Nashville series as well as Bob Milne – Ragtime Piano.

In January 2004, Rex turned over the operation of the Theater to daughter Dixie and in June of that year, the Dixie Theatre began showing Movies for the 1st time in 37 years, and did so for 2 ½ years in conjunction with live professional theater productions and music.

Rex Partington, the last great gentlemen of the Theatre and Co-founder of the DIXIE, died in March 2006…but left the Dixie Theatre as his legacy. 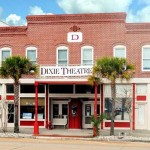 Today the DIXIE is still run by Full-time Professional Volunteer Dixie Partington with help from Cleo. However, it should be noted that the Dixie Theatre would not be here today without the tireless volunteer efforts of Jerry Hall, entrepreneur and local business owner (The Grill, Soda Fountain, Pot Lot, and Up the Creek Raw Bar, Up the Street, Up the Stairs Restaurant).

Due to limited funding and support, the DIXIE is only able to offer a 3 month professional season running January – March.  We sometimes have other events scheduled during the year and these are generally posted here on the website.  Email us or contact our business office at 850-653-3200 for more details.

The Dixie Theatre Foundation, Inc. is a not for profit 501 (c) (3) organization, all contributions to the DIXIE are tax deductible.  2017 marks their 20th Year of Live Professional Theatre and Music at its best!

The Dixie Theatre is a wonderful venue available for private parties during off-season. Contact us for additional details or to reserve.

Our professional season runs January through March. Sign up for our newsletter to see what's coming up.

The Dixie Theatre relies on contributions from friends like you so that we can continue to bring you the high quality, professional entertainment that we have for the past 20 years.

We are a non profit organization and your donation is fully tax deductible.